What Brothel is Closest to Las Vegas?

There are 3 brothels in Nevada all claiming to be “Closest Brothel to Las Vegas”. How can that be? Who really holds the crown? This claim is a huge feather in the cap of the winner. Why? Because Las Vegas is in Clark County, and in Clark county prostitution is illegal. However, there are places that are very close where prostitution is legal. So the claim to being closest to Sin City is a big one for bragging rights. Many other websites who haven’t done their own investigating are wrong as we’ve checked every possible way to get there.

We’re done playing around. It’s time to get to the bottom of this.

The Brothels and Their Claims

The 3 brothels claiming the “Closest to Las Vegas” crown are The Chicken Ranch, Sheri’s Ranch, and The Love Ranch Vegas.

Let’s start with The Chicken Ranch. Their claim of closest to Las Vegas is on their homepage:

“Located about an hour west of Las Vegas, The Chicken Ranch is the closest brothel to Las Vegas.“

Next up is Sheri’s Ranch. Their claim is on their homepage as well, and it reads:

“Sheri’s Ranch located in Pahrump (Nye County) is the closest legal Nevada brothel from Las Vegas, only 60 miles away.” 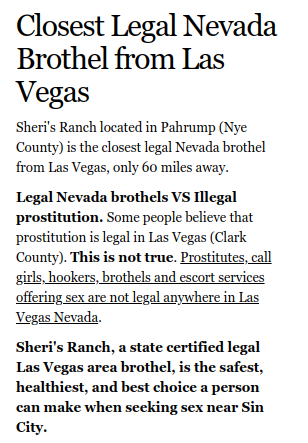 The third claim is from The Love Ranch Vegas (no longer open). Their claim was on their Directions page. It said:

“The Love Ranch is the closest legal brothel from the Las Vegas Strip. Located in Crystal, Nevada…”

We used Google Maps with The Bellagio Hotel and Casino as the starting point. We chose The Bellagio since it’s on the World Famous Las Vegas Strip and right in the middle when looking at the main cluster of hotels on the west side of Las Vegas Blvd. The main cluster starting from The Mandalay Bay and going north to the Stratosphere. It’s also very close to the highway. We did the search on a Saturday when traffic wouldn’t affect the time results. 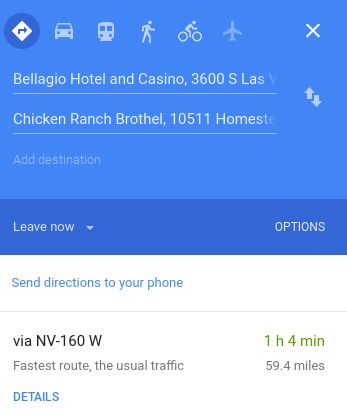 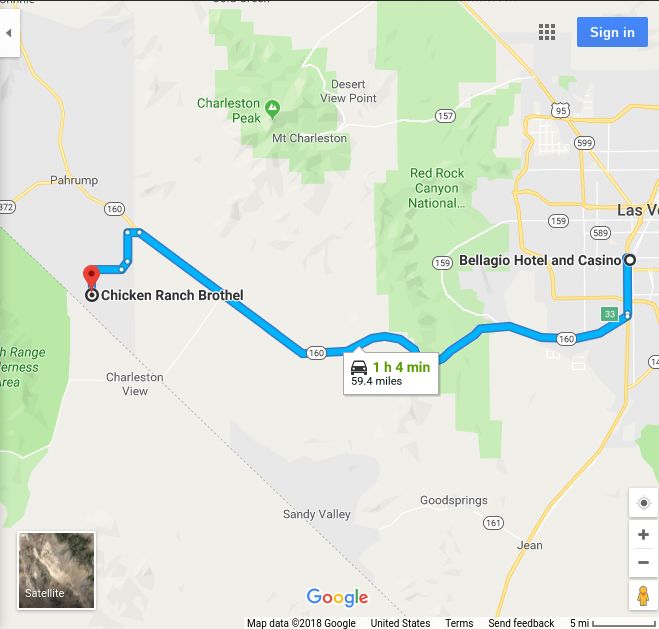 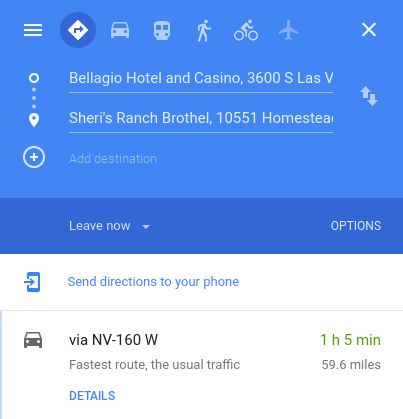 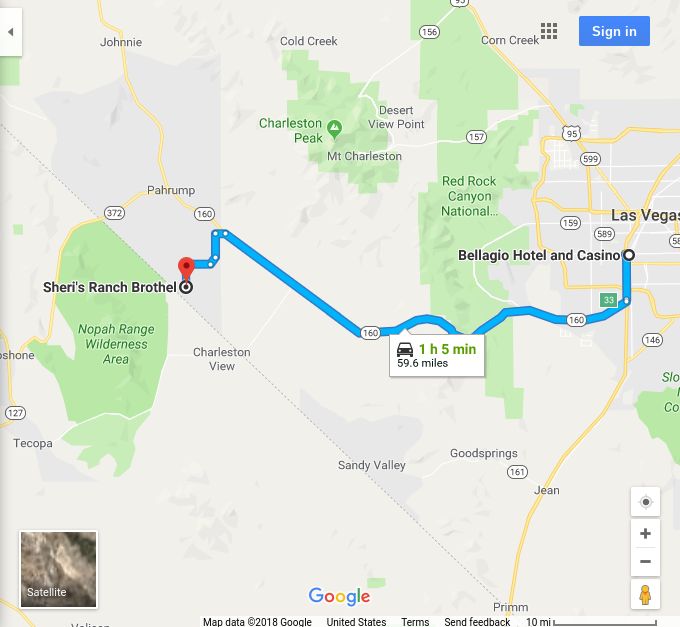 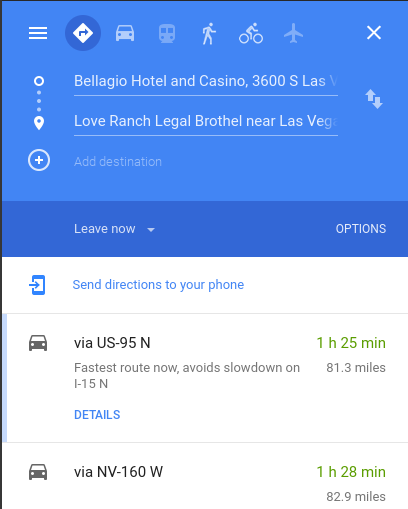 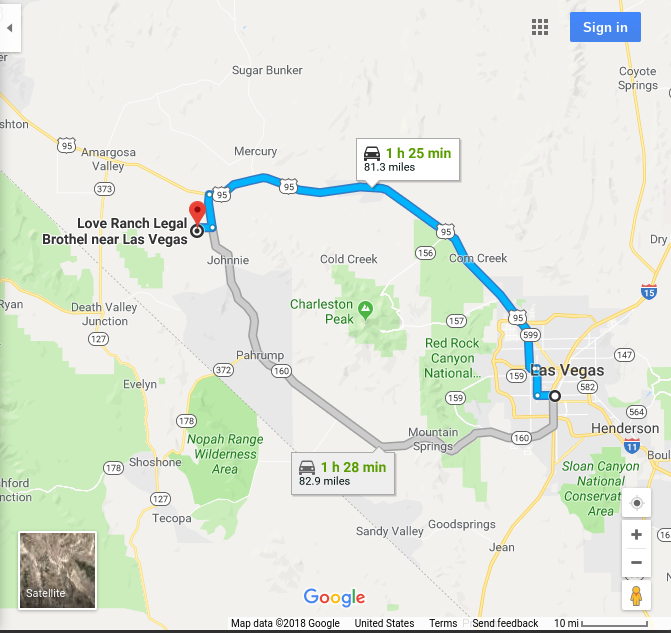 Well, let’s rule out the Love Ranch, because it looks like it’s not the closest drive. 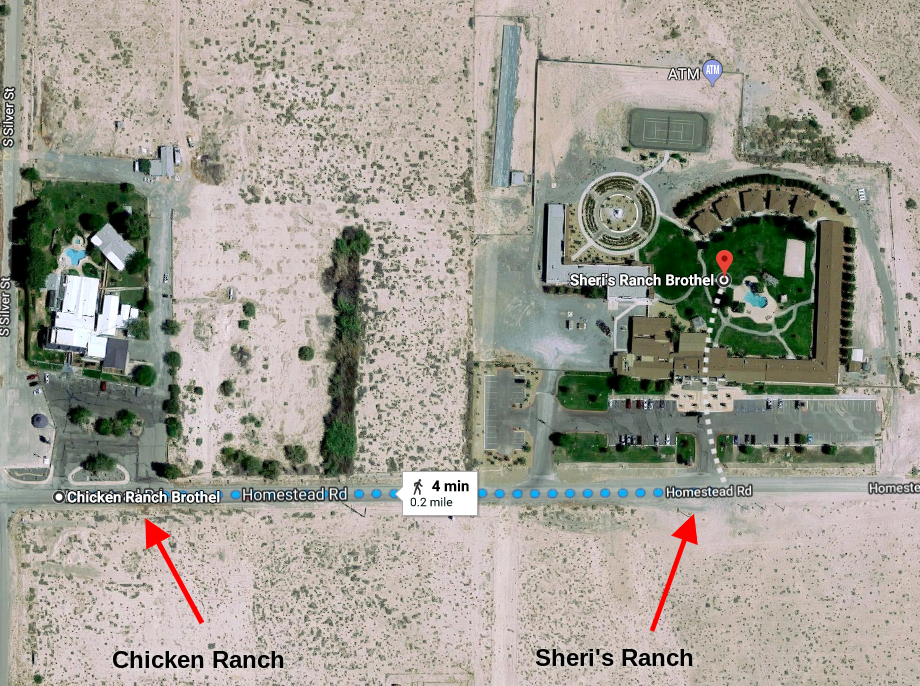 Let’s see if we took a route that didn’t take us past the front door of The Chicken Ranch. Not easy, unless you cut through the street in between the two brothels. So let’s check this alternative route 2 for Sheri’s Ranch. 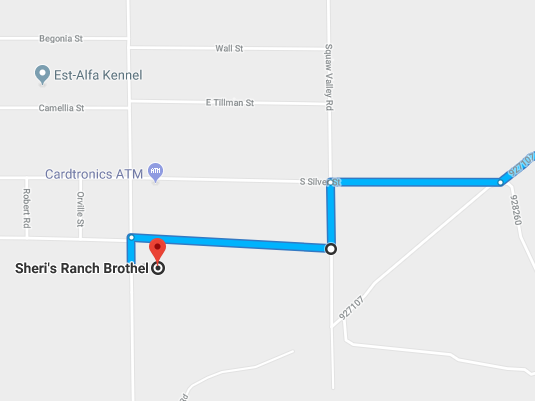 The results of our alternative route to Sheri’s Ranch? 1 hour 9 minutes without traffic. However, it was 58.7 miles. 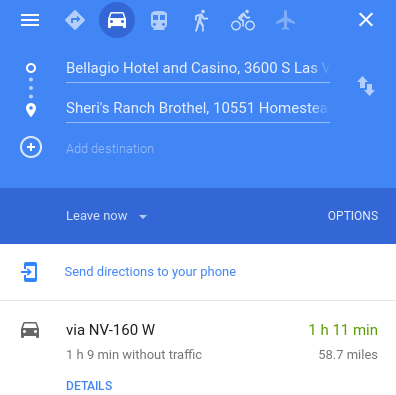 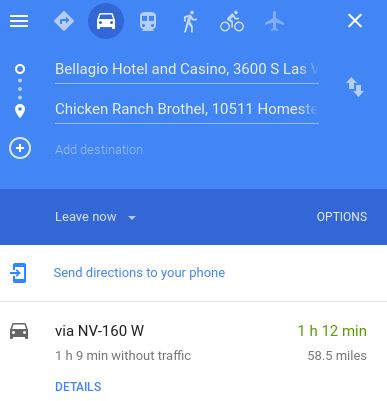 We get the same 1 hour 9 minutes, again, check the “without traffic”. But the clincher here for The Chicken Ranch if you’re looking at mileage, is 58.5. Winning yet again. 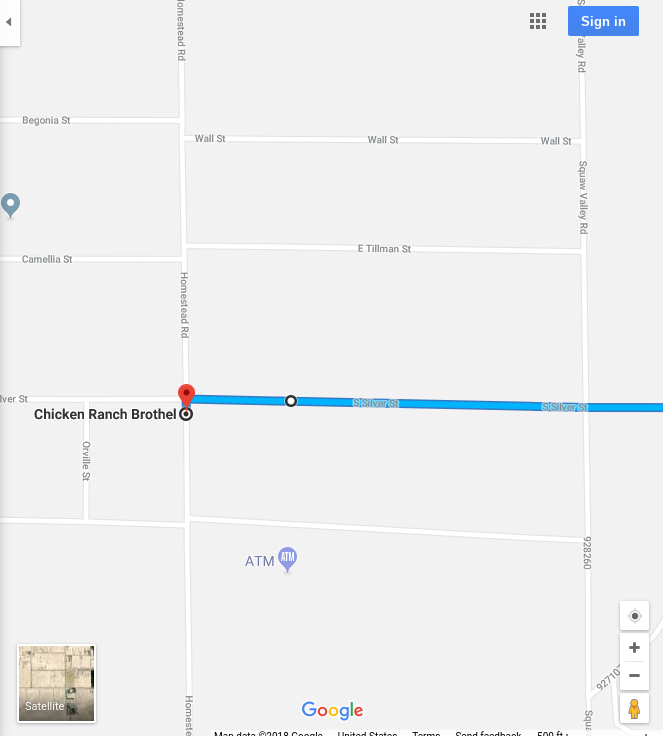 As the Crow Flies

So The Chicken Ranch Brothel takes 2 out of 2 so far. Both time and distance. Let’s take a look at “as the crow flies”. In other words, if you didn’t have a car and were-… a crow… staying at The Bellagio.

From The Bellagio to the Love Ranch, if you flew a direct route over all of the roads, dirt, and desert, it would be a distance of 79.704 kilometers 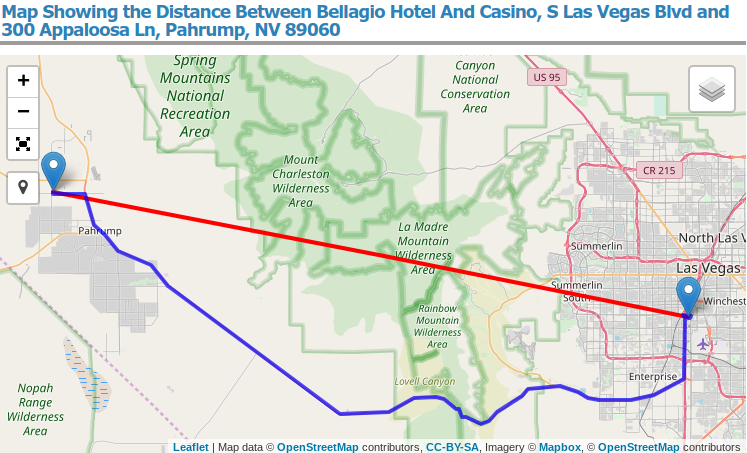 To the Chicken Ranch from The Bellagio as the crow flies distance is 70.165 kilometers 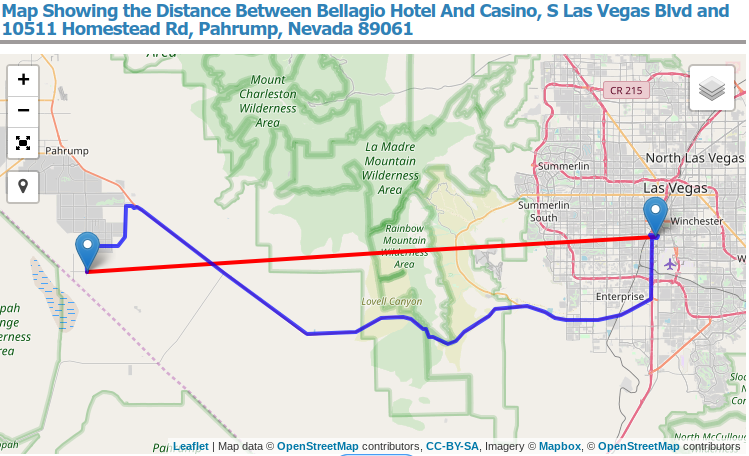 The Sheri’s Ranch as the crow flies is 70.166 kilometers

And the Winner of Closest Brothel to Las Vegas is….

Okay, so we’ve exhausted this enough. According to our calculations, that’s 3 of 3 for The World Famous Historic Chicken Ranch Brothel for “Closest Brothel to Las Vegas”.

Although all 3 offer free limo rides from the Strip, so you don’t have to worry about any of this.